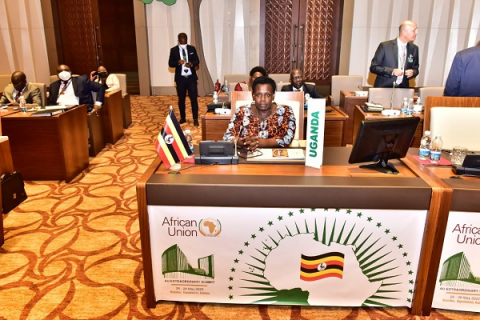 Terrorism, coups, insecurity and armed conflicts featured high on the agenda at the just concluded African Union summit, held in Malabo, Equatorial Guinea. Several Heads of State and governments echoed sentiments to assess and address the threats of what is now seen as re-occurring phenomena, on the continent.
President Museveni, represented by his Vice President Jessica Alupo addressed the summit on three issues; terrorism, unconstitutional changes of governments in Africa and Russia-Ukraine conflict.
On terrorism, Museveni stated that Uganda had managed to defeat the vice over the years including, terrorism sponsored by some international and regional actors. This he said was achieved by building a strong and professional army which is equipped with the correct ideology of; non-sectarianism, nationalism, Pan-Africanism, social economic transformation and democracy. As a result, he added "we have legitimately managed to support some of our brothers in Africa in the fight against terrorism". Museveni further added that African countries should build strong and professional armies with correct ideology to fight and defeat terrorism.
On the Unconstitutional Changes of Government, President Museveni issued a strong condemnation of unconstitutional changes of legitimate and democratic Governments, asking rhetorically, whose interests the coup makers were serving. "Are the coup plotters better than those they are overthrowing? Coup d'etats are not the solution, they simply postpone problems. These Coups make Africa lag behind. Evidence suggests that elected Governments, despite some weaknesses, are more accountable to the people". The President gave a historical context of Uganda, which from 1962 to 1986, had a lot of political turbulence and coups. "These military overthrows caused Uganda to lag behind", he asserted.
On the Russia-Ukraine conflict, President Museveni explained why Uganda chose to abstain from voting when the issue was raised at the United Nations, drawing from the experience of the 1962 Cuban missile crisis, when the US Government sought to overthrow President Fidel Castro causing Soviet Union to deploy missiles in Cuba to save the Government of Cuba. Uganda, therefore is asking the Western powers two questions before we take a position. "As US is now saying that Ukraine is a sovereign state, in the same way "wasn't Cuba a sovereign state?".
Secondly, out of 44 million people in Ukraine, approximately 14 million are of Russian origin requesting Ukraine to be allowed to be bilingual just like Canada. "Why not allow Ukraine to be bilingual like Canada?" To date, Uganda is still
waiting for responses to those two questions from western powers so that Uganda can take a position about the conflict.
He said that African leaders should not be afraid of doing correct things, simply because they are afraid of annoying western powers. "Leaders should instead do things because they are correct and in the interests of their people and, other external actors will understand our correct strategy in the long term," Jessica Alu po read, on behalf of President Museveni.
On his part, Faki Mahamat, Chairman of the African Union Commission said terrorism is not weakening because of insufficient African solidarity, adding that the creation of the African standby force which since its creation is not yet operationalised, and "our fight against terrorism is slowed down by the absence of a strong commitment from the international community with the west's double standards".
Macky Sall, Chairperson of the African Union, also President of Senegal shared data from the African center for the study and research on terrorism which indicated that terrorist attacks on the continent had grown from 508 in 2012 with 2563 victims, to 2034 attacks in 2021 causing 8631 deaths. The chairperson said it was necessary to change the doctrine of peace operations in Africa from "mandates and rules of engagement of operations that prefer peace keeping and not the fight against terrorism".
President Sall also addressed the meeting on unconstitutional changes of Government, giving a deep context of the realities African countries are facing. He called for an end "to the sacrosanct principle of non interference in the internal matters every time the democratic legitimacy upheld by our texts is violated" saying it was an illusion to imagine that coups d'etat are a solution to our problems; because, he said, "might does not make right or legitimacy any more than it can solve the complex issues of economic and social development", H.E Sall further stated that democracy is basically weak, saying that "beyond the texts which give it form, it rests on subtle equilibrium between individual and collective liberties and the necessity to protect public order and institutions".
Several other leaders addressed the meeting with different proposals, commitments and pledges on how to stop terrorism on the continent and, on how to effectively deal with unconstitutional changes of Government in Africa. Four AU member states-Mali, Guinea, Burkina Faso and Sudan are suspended because of coups.
TRANSLATE with x
English

TRANSLATE with
COPY THE URL BELOW
Back
EMBED THE SNIPPET BELOW IN YOUR SITE
Enable collaborative features and customize widget: Bing Webmaster Portal
Back
TRANSLATE with x
English